Tine has created her own version of Mother Earth that proves thoughtfully with the whole universe as its crown.

GAIA is another word for mother goddess. Gaia appeared as a mighty deity. She gave birth to the sky (Uranos), the mountains (Tartaros), and the sea (Pontos). She acts eerie, as the mistress of darkness and the dead, and friendly, as the gentle mother of all living beings. Pictures of her do not occur very often.

Earth, universe, heaven, and divinity. This view is expressed in the Gaia hypothesis that the entire globe must be considered a living organism. In the New Age movement and specific factions, Gaia is a term for the earth or nature as the “nourishing Mother Earth,” a cosmic, living being.

By defying the rules, Tine puts her signature in the middle of the picture as a statement and an essential part of the work. Let your eyes rest over the GAIA. 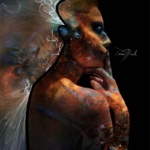 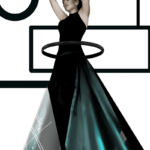